The DFW food truck boom has certainly slowed down, but that’s not necessarily a bad thing – sure, the buzz isn’t what it used to be, but the consistency and execution of the food served in the trucks around town was never been better. Whether you’re grabbing a pastrami sandwich from the office on your lunch break or devouring an ice cream sandwich at one of the many upcoming summer festivals, consider this a guide to getting the most out of the local food truck scene. Here, in no other order than alphabetical order, there are 15 trucks in line that are worth standing for.

There’s a serious shortage of bubble tea in central Dallas, so Bobaddiction’s selection of fruit- and milk-based teas – along with Vietnamese coffee and shaved snow (a close relative of shaved ice) – is a welcome four-wheeled sight. The Boba Slingers are often parked by the Monkey King for weekend dinner, and for those of us who love to chew their drinks, it doesn’t get much better than hand-drawn noodles paired with green bubblee of lychee. 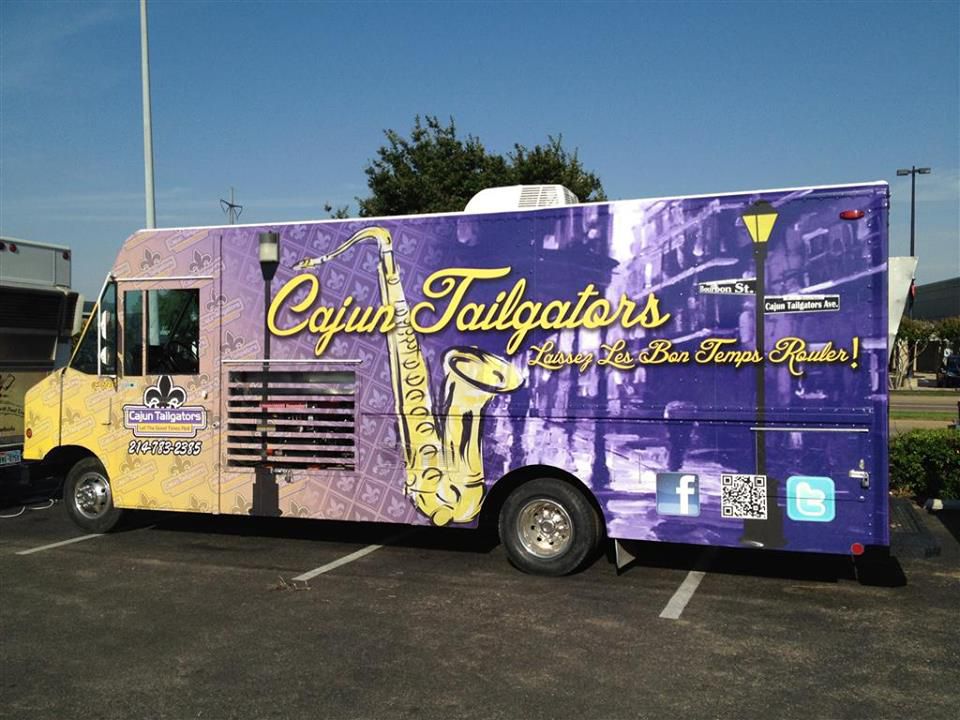 Often spotted in the truck yard, this truck offers a flagship meal that’s just as fun as eating: the lobster gun. It’s like a Cajun kolache, but the batter is flaky like French bread, and inside it’s gushing with lobster and cheese flooded in Chacheres-style spices. The Tailgators don’t stop there, however; Riffs on boudin balls, gumbo and fritters are worth their seasoned salt. Don’t feel like chasing the truck? Curl up in downtown Plano. 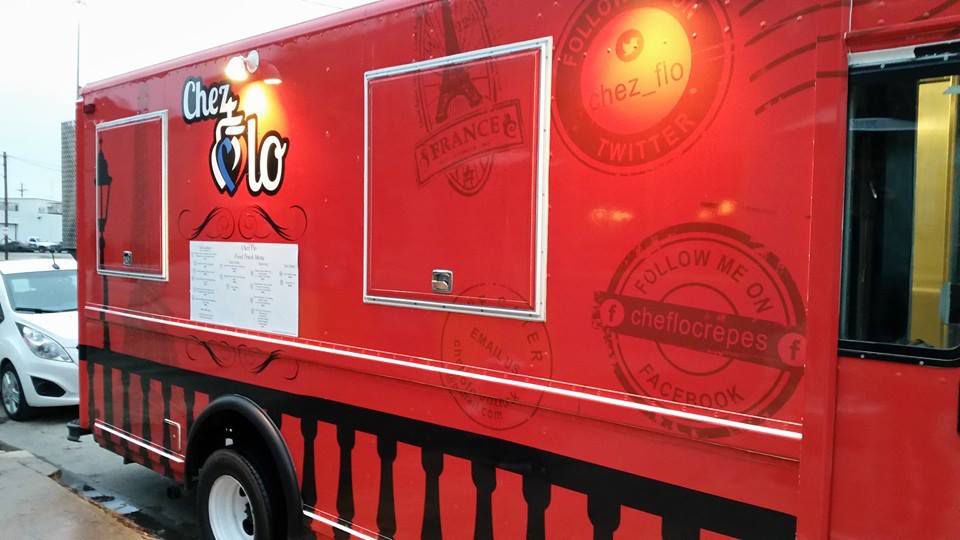 Be honest: most of us are not chic enough to eat crepes in our normal everyday life. But somehow, these thin French pancakes are the perfect meal for a food truck – whether they’re sweet with Nutella and bananas or savory with turkey, creamy brie, apple, bacon, and tomato. Whichever route you choose, take an order of their spectacular, award-winning garlic parmesan fries. 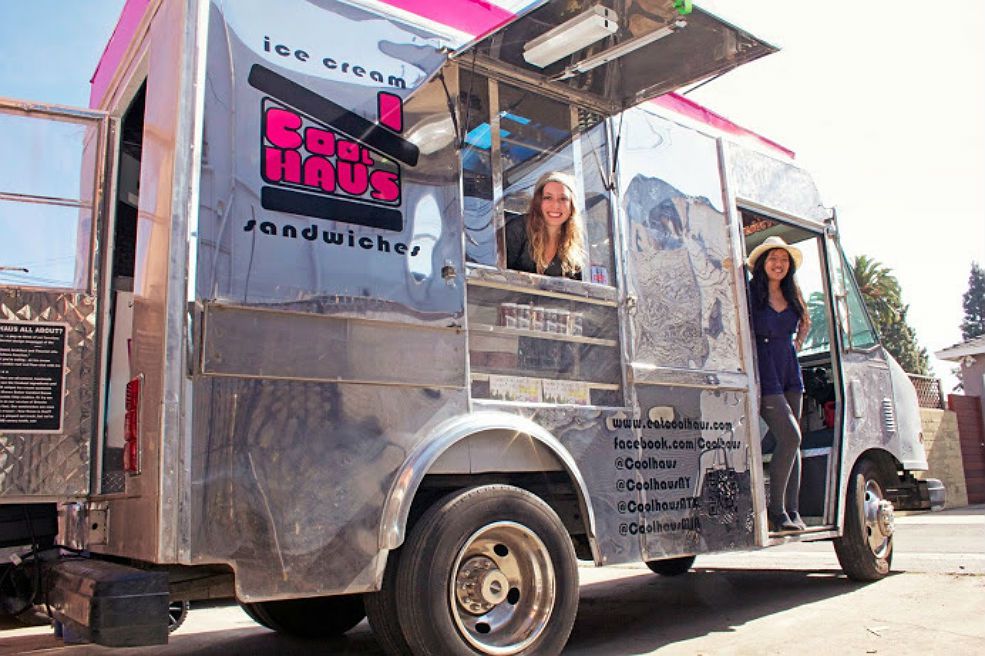 Coolhaus is a fixture at Klyde Warren Park, always delivering delicious ice cream sandwiches with serenity. Soft, freshly baked cookies in flavors like red velvet, chocolate chips, and snickerdoodle can be paired in every imaginable way with ice cream in flavors that range from people-friendly (Nutella, Tahitian vanilla) to downright weird (fried chicken and waffles, beer and pretzel) . If you’ve dreamed it in a drunken haze, Coolhaus probably serves it up. 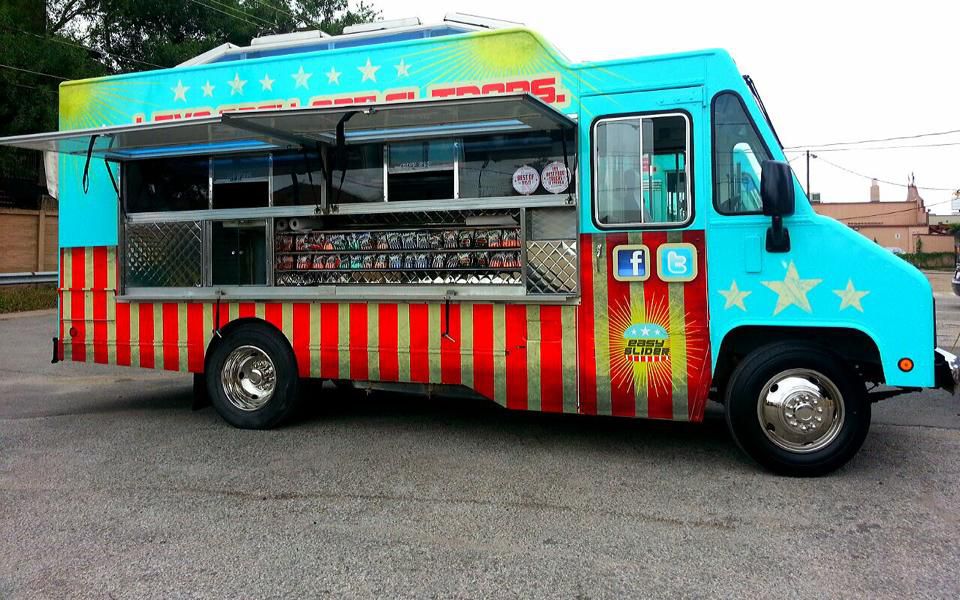 This hugely popular truck from Miley Holmes and Caroline Perini is by and large one of the kings of the Dallas food truck scene, and the throne belongs to them, and rightly so. These sliders of the same name may not have most of the other famous burgers at the Metroplex, but they have a high taste. They’re as damn good as they are adorable. The Roadside (with cheddar, jalapenos and barbecue sauce) is a crowd puller, but the Sweet & Lowdown is the headliner: goat cheese, bacon and strawberry jam can be wonderfully combined to give Easy Slider their most delicious little performance. 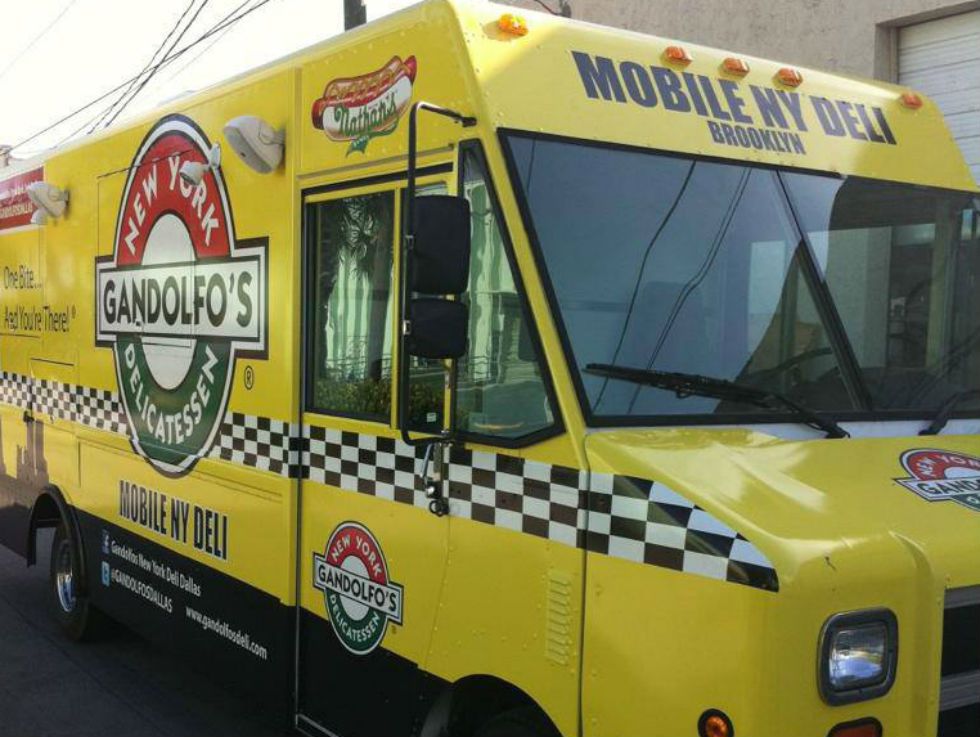 Piles and heaps and heaps of hey-that’s-actually-a-decent-facsimile-of-a-New-York-deli-pastrami is what Gandolfo sells, and they sure do it. Yes, they put it on pretty thick with the New York-by-Way-of-Dallas theme and harrowing menu pun, but their pastrami sandwich is simple, well-made, and a joy to take. Catch them during breakfast hours for a New York-style breakfast sandwich – that is, served on an imperial bun – minus the ever-present smell of trash and rude commuters. 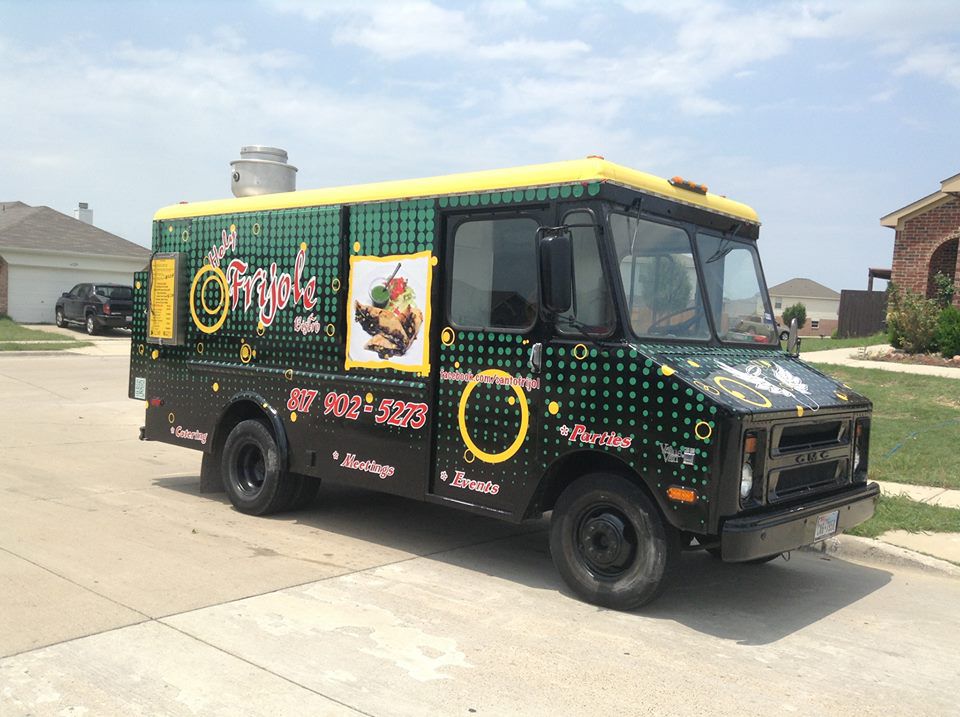 The Holy Frijole Truck is often out and about in the Fort Worth Food Park and serves quesadillas, burritos, tortas, homemade salsas and huaraches – think of delicious Masa pancakes with beans, salsa, cheese, crema and avocado. The tacos they dump aren’t that bad either, and with a multitude of options – chicharron, fish, even duck – you can’t order your standard asada and pastor if you don’t want to. If you do this anyway, don’t worry. Holy Frijole ensures that their standby options run the same as the versatile ones. Seriously, where else can you get a Huitlacoche quesadilla from a truck? 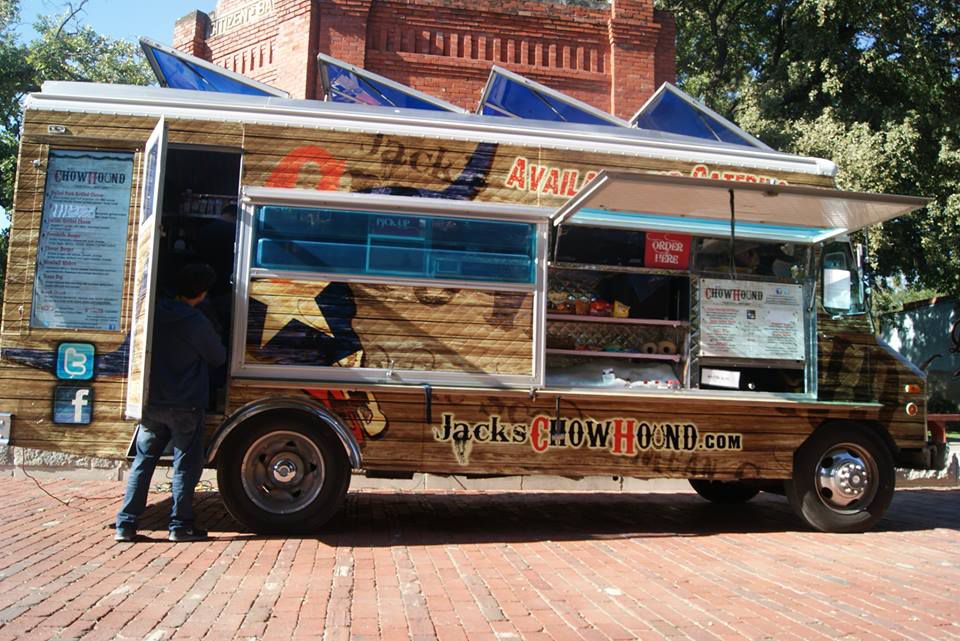 Any worthwhile list of trucks serving groceries has to show respect to their ancestors, and Jack’s Chowhound was one of the originals that laid the groundwork for the DFW food truck scene. Jack’s Chowhound pays for itself as comfort food on wheels: the grilled pulled pork cheese oozes as well as it sounds, and sourcing their bread from the Village Baking Company (just like at Off-Site Kitchen) gives their big-assed burgers a sturdy look Grade. well constructed base. With good ingredients and heaping portions as pillars, Jack’s has endurance. 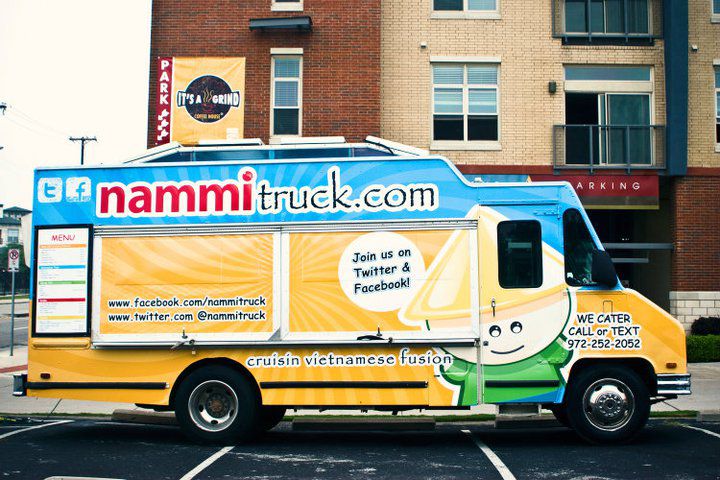 This productive truck offers large and tasty Banh Mi style sandwiches. (The tacos that turn out aren’t rags either.) Their pork offerings, grilled and broiled, are both impressive, but the BBQ version is a bit better – the flavors pack more punch – and definitely what you should choose to order To fill yours with just the right ratio of crispy to pillow-like baguette. Also take a bag of shrimp snacks with you; Crunchy and salty, they’re a unique, worthy companion of one of the best banh mi in town. Get ready to see the more permanent digs coming soon at the Dallas Farmers Market. 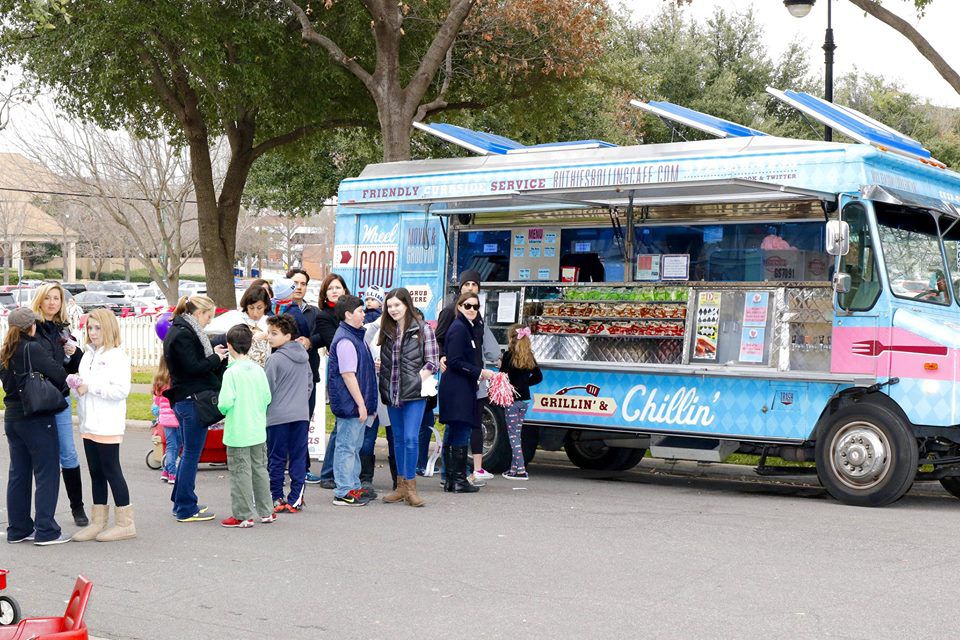 Ruthie’s food trucks are a real crush. There are four of these that prove that DFW’s hunger for grilled cheese sandwiches can never really be satisfied. Perhaps the most popular (and rightly so) is The Boss – barbecue-sauce brisket soaked in an obscene amount of cheddar cheese and pickled in expertly buttered and grilled sourdough toast. 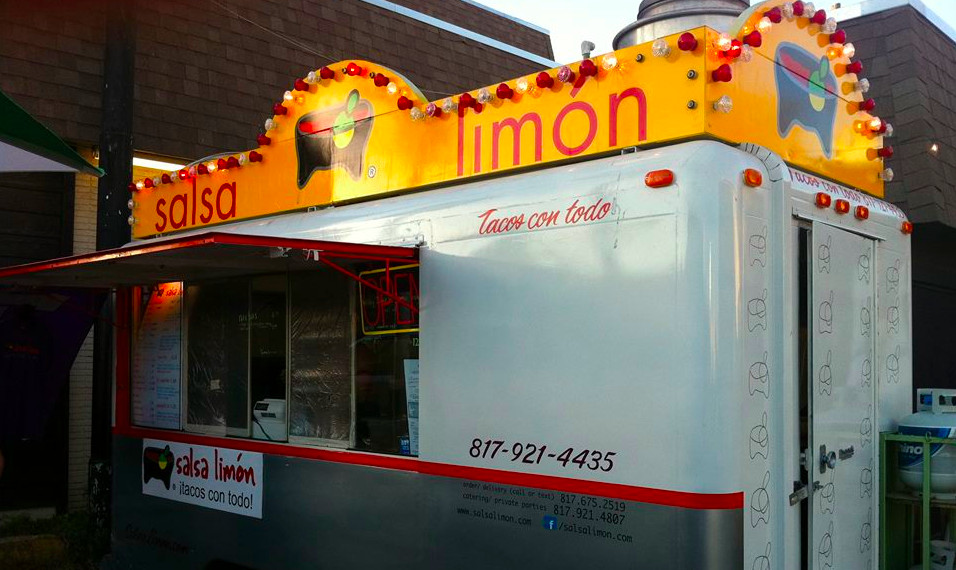 The folks behind the burgeoning Fort Worth empire, Salsa Limon, know their way around all kinds of traditional Mexican tacos: lengua, tripas, chorizo, barbacoa. Your food truck, which is often parked on Berry Street near the TCU, has started it all. They grew from humble, no-nonsense truck tacos to multiple restaurants. The next time you’re in Cowtown, check out the truck – and of course order some delicious best-in DFW tacos. You can’t go wrong with the El Capitan, a hearty rock steak with melted cheese, pickled cabbage, onions, and coriander heaped in a butter flour tortilla.

Get to grips with the Cup Bob: rice or pasta, meat choices (you can even choose Spam if you dare) and sauce choices (Bulgogi sauce? Eel sauce? Spicy sauce?) In a cup. It’s customizable, portable, simple, and satisfying: it’s everything food-truck-food should be. Plus, Say Kimchi’s Korean tacos are a bit more inspired than your average version: the white corn tortillas are thoughtfully charred, and the tangy chili sauce is actually hot. The Bulgogi Philly Cheesesteak is also worth trying. It’s a monstrosity no doubt, but it’s pretty good too. 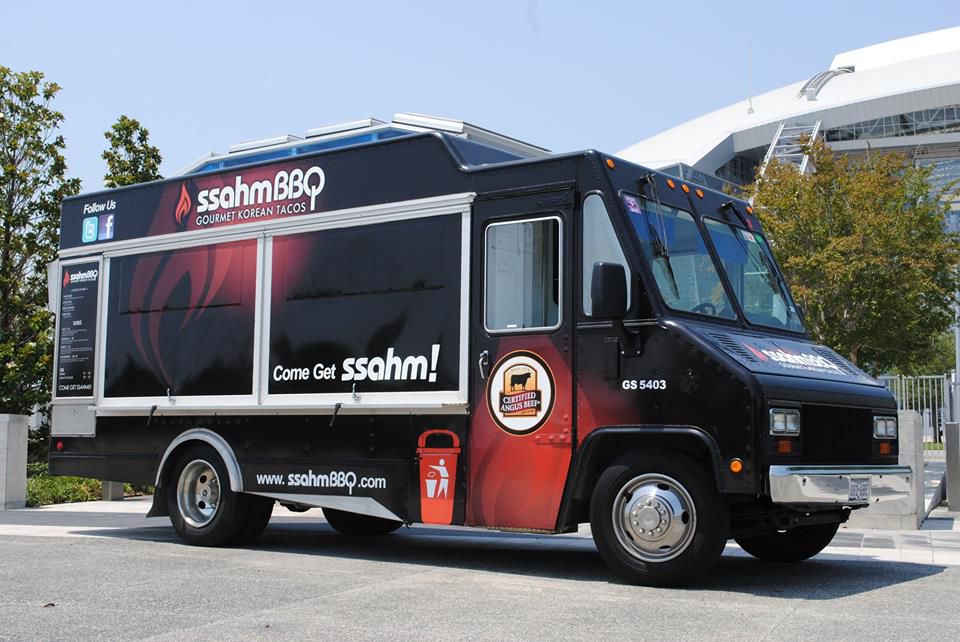 Ssahm’s kimchi fries are the unholy, sloppy, sticky, crispy, flavorful Korean fusion version of Tex-Mex enchiladas. They may not be original, nutritionally advisable, or particularly appealing, but when the fries are crisp and crispy, the pork spicy, and the mayo sauce, they’re damn close to the tastiest street food Dallas has to offer. 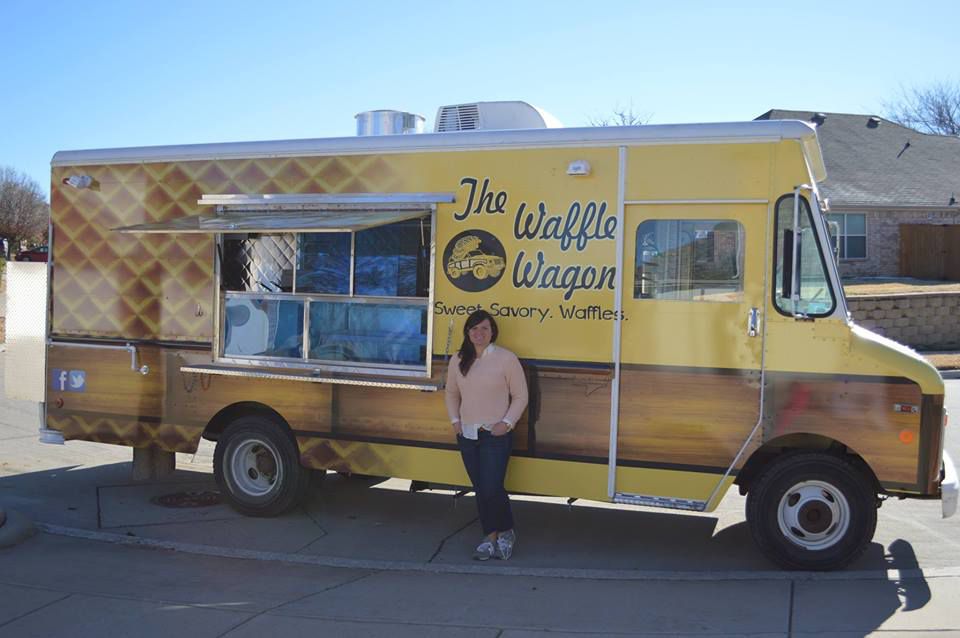 A staple of the scene outside the East Side Social Club, Denton’s sprawling Mecca for craft alcohol, the Waffle Wagon (surprise). Most of the menu items read like a mistake – a BLT on a waffle? Chicken Waffle Salad? – but luckily they are all prepared with an enthusiasm and devotion that matches their creativity. The waffles themselves are airy and addicting, and even the eyebrow pairings work – especially after you’ve had a few drinks. 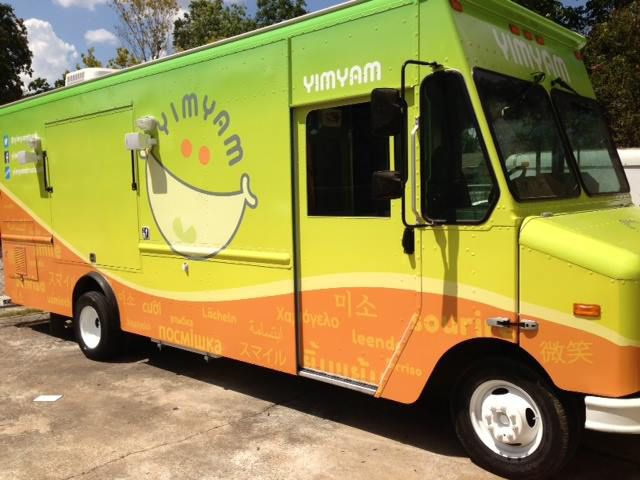 Yim Yam sounds like the name of an app that broadcasts digital millennials buzzwords live. Or maybe the secret name of the illegal currency of a dark corner of the underground internet: “ATTN N00BS GUNS AND DRUGS FOR SALE 5 YIM YAMS OBO.” See, it is neither; It’s a food truck that serves Thai food, but with unexpected disrespect: green curry pork tacos, for example, and Thai chicken wing pops. Chicken wings on sticks! Meat on sticks was sorely lacking in Dallas’ street food oeuvre. Thank you Yim Yam for doing something about this sadness.

Multi-Vehicle Crash And Rollover In Fort Worth Leaves 1 Dead, 2 In Critical Condition – CBS Dallas / Fort Worth

Fort Worth Heatmap: Where to Eat Right Now

5 Best Thai Restaurants in Fort Worth 🥇