I’ve been to some of the main Fort Worth Food + Wine Festival events and know what to expect now. Because there are so many different types of wine that if you try to taste it all, even if you spit out all of the wine, you will be bombarded. I usually never find dessert wines at this event (and I search because dessert wine is my thing), but I was pleasantly surprised to find Lange Twins’ MVP dessert wine. The vineyard compares it to a ruby ​​port, but I found that it has the creaminess and lightness of a tawny port. The price is certainly appropriate. As usual, the area in front of Pier 1 Tower was dedicated to beer, cider, and liquor, and I found Seersucker Southern Style Gin handing out some cocktails. I didn’t think gin would be my drink, but it was made into a mint flavored cherry lime that gave a very drinkable drink a pleasant earthy undertone. Oh, and I heard Brad Paisley and Alison Krauss play “Whiskey Lullaby” in the Maker’s Mark tent. That’s an odd choice to say the least.

Although dinner was supposed to last until 9:00 a.m., most of the restaurants there ran out of food by 8:00 a.m. I’m amazed I couldn’t try what Malai Kitchen was handing out, but I got some from Nonna Tata’s mushroom risotto. It won’t win beauty pageants, but it’s powerfully fragrant. Bob’s Steak & Chop House served prime rib and lobster in a sauce, and while I think the whole concept of Surf and Turf is fundamentally flawed, both items were done quite well. I think my favorite dish at the event was the Grace Restaurant’s swordfish, where the peppery bite of the seared fish played off the cream sauce underneath and the pickled onions.

The swordfish entree at the Grace Restaurant.

What else? Eddie Vs Prime Seafood released a tuna tartare with the dark flavors of sesame oil and sriracha. I’ll take this combination over soy sauce. Lots of people were lining up on the veranda of Piattello Italian Kitchen. It was good, with the leaner meat and the thicker meat cut separately on the plate. When the weather changed, the wind blew away the associated frisée, and I’m pretty sure that is the definition of a First World problem. And I liked the shrimp ceviche HG SPLY CO gave me with just enough lime juice to bring it to life without drowning. 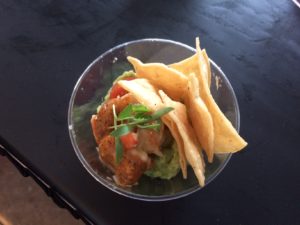 And then there were the insects. Magdalena’s issued tostadas with Chicatana ants, which are cooked in a pan and used either as a filling for a taco or ground into a sauce. People say the taste is different from anything else. I thought it tasted like ground beef, but hey, making me eat insects is an accomplishment. 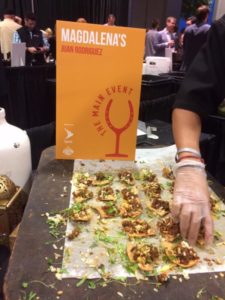 There are ants in my food and they are delicious.

On to the dessert event that took place at the Whiskey Ranch this year. Firestone & Robertson have sponsored this event in the past but this year the festival simply moved it to their showroom and distillery. Seems like a great place to have a whiskey with 50 of your friends, but I moved on from Susie Cakes’ table to come back and then it took me forever to find her again, what with the ranch layout has to do. Another problem with this event is that all pastry chefs are required to use whiskey as an ingredient, and it appears to have limited versatility as a dessert ingredient. The endless parade of chocolate stuff was only interrupted by the occasional banana dish. Of the former, Susie Cakes’ chocolate whiskey cupcakes were my favorite, though the Gold Ribbon Confections pecans melted in whiskey-laced chocolate weren’t too shabby either. 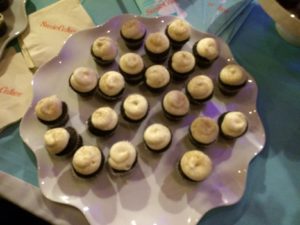 Susie Cakes’ chocolate whiskey cupcakes made good use of the featured ingredient.

In the non-chocolate section, Joy Macarons whiskey-laced vanilla ice cream sandwiches were something I could have had a second of, but what JayCee Hospitality did, I preferred to make a bed of feathered whiskey turmeric mousse and slices in it to put banana and coffee wafers with cocoa nibs embedded in them. The bananas carried the sweetness here, and the waffles added a nice bit of darkness to the dish.

Among the cocktails made with the whiskey, Avoca Coffee had a cocktail of coffee-infused whiskey and nitro stout. It reminded me of why I avoid coffee, but a fan of iced coffee that isn’t fizzy could be stuck in it. Bird Cafe tried making an apple pie with whiskey, cider, and ice. They would have been better off if they had left out the cider altogether. The only drink I could offer came from the unlikely source of B&B Butcher, who made a drink called “Texas Keys” with whiskey, lime juice, coconut, whipped cream, and cinnamon dust. It was supposed to taste like key lime pie which it didn’t, but I liked it anyway.

Maybe in another year one of the most famous craft breweries in our city will sponsor the dessert event and we’ll see what the chefs and mixologists can do with beer. Meanwhile, in the middle of the whiskey, I heard Kendrick Lamar’s “Swimming Pools (Drank)” being played by the DJ, which is another weird musical choice. And I passed Andy Dalton in the hallways of the whiskey ranch. Anna Caplan will be back to cover what happened on Saturday.