“I can’t miss this opportunity,” Abreha said. “You have to do your homework. That’s why I go to school. I’ve come here from a long way and a good education is very important to me.”

Abreha only recently began to thrive as a runner at Grapevine when her foster parents encouraged her to give the sport a chance, which did not immediately lead to success.

“It was tough,” said Cynthia Becker, Abreha’s foster mother. “It was very slow, but it has just made tremendous progress.”

“I couldn’t walk for two weeks and told them I was going to give up,” Abreha said. “They said this was your first year, just try by the end of the month. I listened to them and I’m glad I did.”

That mind of not stopping is a reflection of what she has overcome to get to this moment.

After living in poor conditions in a small village in Eritrea, Africa, then only 10, Abreha escaped extreme poverty and political persecution and traveled through treacherous terrain before going to Ethiopia, where she lived in a refugee camp for three years before he was relocated to the United States.

She said she often thought about how different her life would be if she hadn’t escaped.

“I would probably have three children now, married to someone I had never met and only have a family, a husband, a wife, a cook and a cleaning lady in the house,” Abreha said. “Now I have an education and I can choose what I want to do. It’s really amazing.”

Now five years later, Abreha has gone from a missing word of English to a 3.70 GPA student and competitive cross-country runner who went to the University of North Texas that fall, and she eloquently described this remarkable one Journey from Poverty to the US American Dream in an essay broadcast as part of her application for NBC 5 Wingstop Scholar Athlete of the Month:

“This is my story.

Extreme poverty. Leaving home at the age of 10. Refugee camp. Coming to the US without English. Three different foster families. I got through it all. I am a survivor.
I grew up in a small and impoverished Eritrean village. It is surrounded by trees and mountains. The people there live from agriculture. Our hope is from God. Water is scarce. If it doesn’t rain, the farm will run dry and we would starve. If it doesn’t rain, we can’t water the farm because we don’t have enough water to drink. We didn’t even have a toothbrush to brush our teeth. The people in my village are so poor that they marry their daughters when they are 14 or 15 years old because they cannot feed them. My older brothers and sisters left the village because, given the poverty and dictatorship of Isaias Afewerki, they did not have the opportunity to realize their dreams. I didn’t want that for myself.

In 2013, early in the morning, I took my school backpack with me as if I was going to school and drove to Ethiopia. I didn’t tell my parents that I would go. My eyes started to tear. My heart was beating fast like I was dying. I knew when I crossed the border there was no going back. It was sunny and I was very thirsty. After walking for an hour, I saw a small puddle of water, but the water was very dirty. I drank it. All my life I have grown up with dirty water. I climbed the mountains. I prayed hyenas wouldn’t find me because there were tall trees all around me. Hyenas are always hidden in trees.

I arrived at the border where the Ethiopian soldiers live. They greeted me and I stayed there for three days until they processed who I was. The people who took me to the refugee camp came in a huge truck and I started my journey. Later that night the driver had to take a break, so he took me to a walled prison yard and went somewhere to go about his business. A soldier was standing near me with his gun as if I was running.

I couldn’t sleep because of the hard floor, traffic, and noisy dog ​​in the neighborhood. Nothing to fold or make the bed when I got up. Pigs shared the room with me. We had a competition every morning to see who got the garbage meal first. There was also a woman there with her child. The kid had a biscuit and started throwing it away for the pigs, but I couldn’t let the pigs eat the whole biscuit. I was there for three days. I was hungry, cold, and scared.
I spent the next three months in a place called Indaba Guna while I waited to be sent to the refugee camp. I shared a large room with about 100 women and children with mattresses all over the floor and my job was to remind them to clean up and give them their breakfast biscuits.

I arrived at the refugee camp and started living in a tiny house with 10 children from different backgrounds. There weren’t enough beds for all of us, but we all had blankets. Soap and water were scarce. A friend of mine committed suicide. Although it was difficult to live without my parents, it gave me the courage to look after myself and I had constant access to food, church, and school.

After living in a refugee camp for three years, my case manager told me I was going to America. My heart leaped like a frog. The people who worked with the program took me to the airport. However, having never been to a fancy place like the airport, I thought heaven when I arrived. I stood and looked at people walking back and forth. I didn’t know anything about airplanes. There was a man with me who helped me throughout the flight. The next thing I knew was that the plane was moving.

When it took off, my heart jumped. I didn’t think I would make it. And I certainly didn’t know what to do with the socks because I’d never had a pair. I was scared of eating the strange food they gave me.

My trip to Texas lasted 3 days. I had no idea where I was. I made it to Almighty God safely, but the challenge was that I couldn’t speak English. When people started talking to me, I couldn’t answer.

I started my new life with people I had never met – different languages ​​and different cultures. They started talking to me and introduced themselves. I couldn’t answer because I didn’t know what they were saying. But I was very overjoyed because I heard that America was a great place.

School started a month later. First day of school in America. My foster mother takes me to school. I don’t remember which class was my first lesson, but someone from the front desk took me to class. I sat there and the students kept coming one after the other. I was scared. I was the only person who didn’t speak English. The teacher started talking, but I had no idea what he was saying. After class, the students went to the next grade, but I sat and wondered where the students were going. Where I grew up, we sat in a classroom and the teachers changed.
The teacher came to me and took me to my next class. All of my teachers were told I didn’t speak English and they started taking me to my next class. Weeks later, the students asked me how old I was. I said 50 instead of 15, they started laughing. I had no idea why they were laughing

After living in my first nursing home for 3 years, I moved because I was uncomfortable. First, I had no help in school. And then I really needed help because I couldn’t understand the material. Education is very important to me because as a child I had no chance of further education. Both of my foster parents worked at night and slept during the day, so I fed myself too. I didn’t have a good relationship with them at all.

I moved and started all over with new foster parents at the Percy House. The Percy house is basically for kids who don’t have a family or a home. It can accommodate just 7 children from different countries, beliefs, and races. It was difficult to get used to for the first time, but after a while we became family. A year later, my case manager told me I had to move.

Now I’m in my third nursing home and third high school. Moving from place to place, making friends, getting used to new families and schools was a challenge. But I am a survivor. “

“She’s been through a few fights, but there’s a force in her that I think a lot of us haven’t seen before,” Becker said.

A force within her with an extremely bright future for a senior most often referred to as resilient and on a remarkable journey towards her dream. 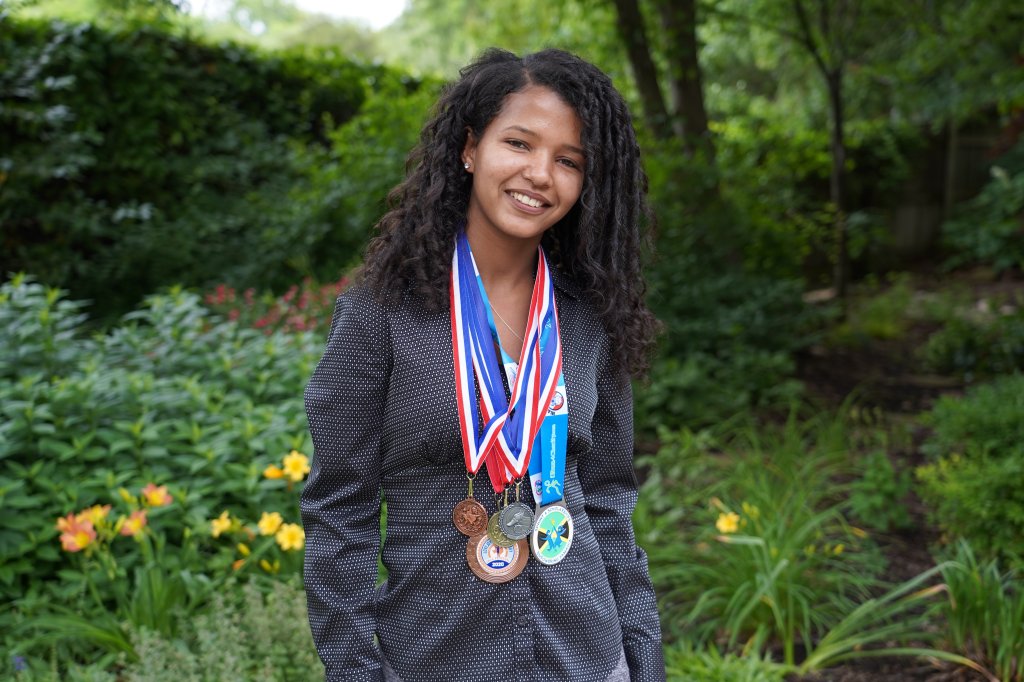 Congratulations to Tiblets Abreha, our Wingstop athlete of the month.

Affordable community with parks and trails planned for west Fort Worth