Over the course of five years, starting in 2010, the Egyptian-American artist Wael Shawky created an epic film trilogy about the Crusades from a medieval Muslim perspective, which was presented in the form of a puppet show on the screen.

Now a piece of this remarkably rich and deep visual world is on view as part of the “Focus” exhibition series at the Museum of Modern Art in Fort Worth. It includes one of the three Cabaret Crusades films as well as 28 new drawings based on the films and a single bronze sculpture.

In the right gallery is the one-hour path to Cairo (2012), whose timeline extends from 1099 (the fall of Jerusalem and the end of the first crusade) to 1147 (the start of the second crusade).

We see the colorful intrigues, machinations and romantic subplots as the Arab rulers react to the threatening advance of the Franks. The film consists of a series of episodes that the viewer can step in and out of. According to the artist, there is no need to watch the whole thing from start to finish in order to make anything out of it.

Wael Shawky’s “The Gulf Project Camp: Sculpture # 4” (2019) is part of the exhibition, which runs until July 25th.(Fort Worth Museum of Modern Art)

The whole drama is enhanced by the expressive soundtrack of soulful Fijiri vocal music from Bahrain that sounds a bit like a Middle Eastern version of the Mississippi Delta blues. With male voices, hums, hand claps and drums, the Fijiri singers create a timeless, original and intimate accompaniment to the on-screen action.

In the other two galleries, the intricate drawings and sculptures concretize some of the details seen in the film and highlight them for closer examination.

Part of what intrigues Shawky’s work is the way he alienates his materials – using them in novel or unusual ways.

With Cabaret Crusades he was careful not to use anything that would resemble a stereotypical image of “Arab culture” too closely. For The Path to Cairo he employed the professional ceramists at the École de Céramique in Aubagne, France, whose workshops created 110 puppets in traditional French canton technique, which had been used for Catholic nativity plays since the 18th century.

Here, these nativity-style figures depict the Muslim residents and rulers of Aleppo and Cairo who were besieged by the Frankish armies. (He used African masks and Venetian Murano glassware for the other two Cabaret Crusades films.)

Shawky is well positioned to tell old stories from a new perspective. The 50-year-old artist was born in Alexandria, Egypt, where he completed his undergraduate studies before moving to Philadelphia to study. Today he lives and works in both places and says that he prefers the creative environment in these medium-sized cities to the noise and crowds in New York or Cairo.

During his childhood, his family lived for a while in the Saudi Arabian city of Mecca, where he saw how the oil business had created an improper combination of austere, traditional Arab culture and American capitalism, creating visions of prosperity, power and development among the people stimulated people in the Gulf Arab countries. 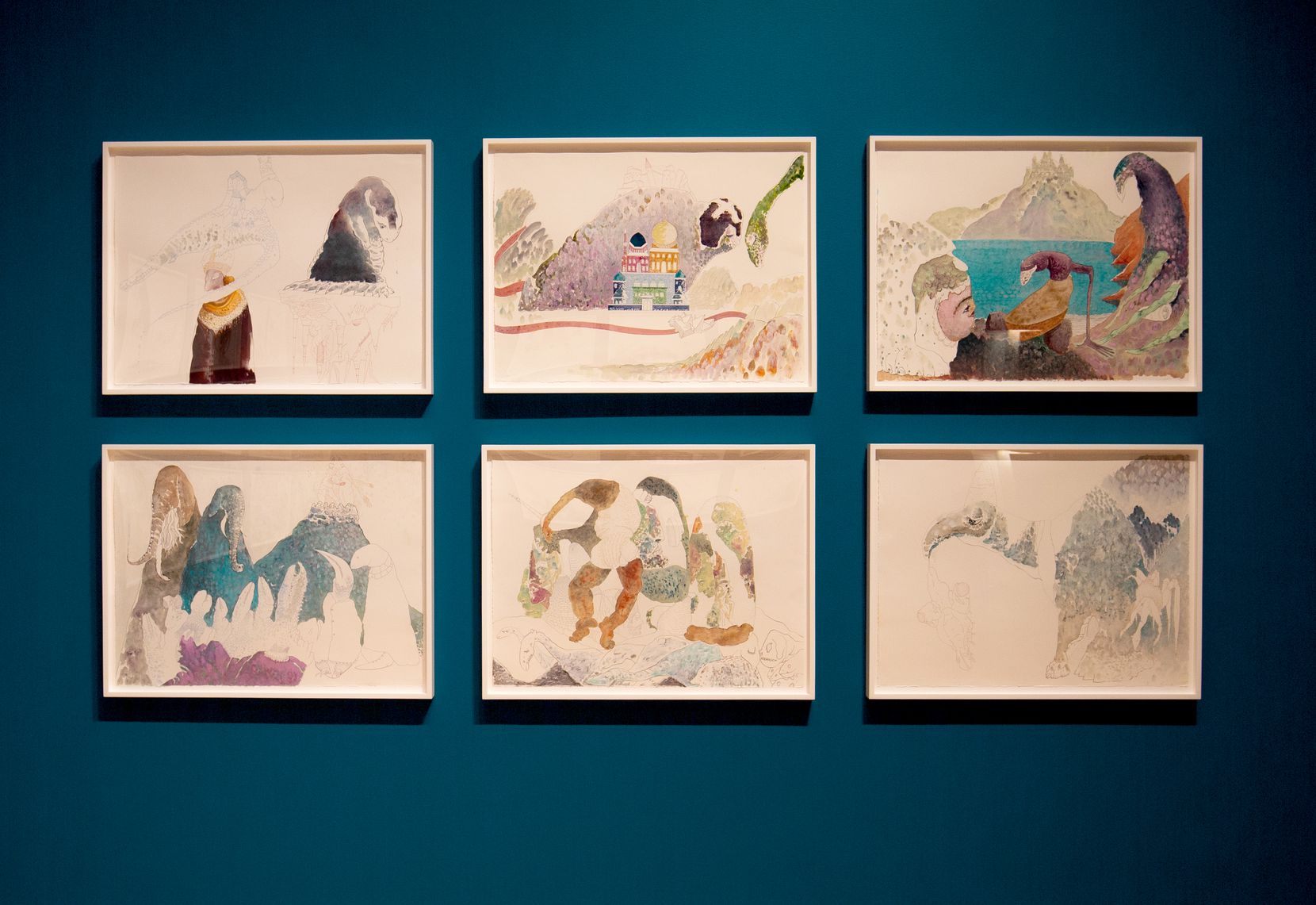 Wael Shawky’s “Cabaret Crusades” drawings are based on his film trilogy.(Evie Bishop / Fort Worth Museum of Modern Art)

His research for the film project began with the book The Crusades Through Arab Eyes by the Lebanese historian Amin Maalouf, published in 1983, which led him to the writings of Muslim historians and geographers of the 11th and 12th centuries with which he created the scripts for the films.

It could be argued that given the scale of US engagement in the Middle East, Americans have a moral obligation to try to understand the perspectives of the people living there. In this regard, Shawky’s work undoubtedly stimulates morally pressing and far-reaching reflections on conflict, conquest, and civilizations.

But his films are also a lot of fun. The ceramic figures look weird and even bizarre, while a puppet show naturally feels more fantastic and otherworldly than watching human actors.

In fact, Shawky says he is less concerned with the specific facts of history than with how memory and imagination shape people’s dreams and desires. In this regard, his treatment of the Crusades is more timely than ever.

Fort Worth Teachers Sees Her Impact on Student, 43 Years Later – NBC 5 Dallas-Fort Worth

Affluent Fort Worth neighbor cashes in among richest U.S. communities

The Most Famous Graves in North Texas